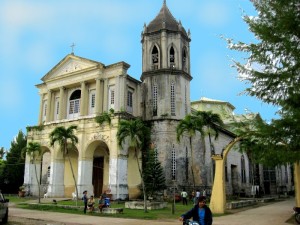 A beautiful church in Bohol is the Church of Our Lady of the Assumption in Dauis, on the Island of Panglao, Bohol, Philippines.

Dauis Church is a 5 minute walk from the Coco Grove
Hotel and the Vano bridge that connects Panglao with Bohol.

The church was founded by the Jesuits Fr. Diego de Ayala and Joseph
Gregorio. The church is build in a mixture of styles, influenced by
both Byzantine and Romanesque architecture. Inside, on the ceiling,
are some impressive frescoes painted Ray Francia in 1916. Lito Arraya
renovated the building in 1970. The church's patron saint, the Virgin
of the Assumption, is said to possess miraculous powers. An old legend
relates that once, when the town was invaded by pirates, the people
of Dauis locked themselves into the church. However, they soon ran out
of provisions and water. Then a miracle occurred: a well appeared at the foot of the altar. This same well is still the main source of water
for the people living close to the church, and, although the well is
only a few meters from the sea, the water is absolutely fresh. The water
is said to have healing powers, so, if you're visiting here, don't forget
to bring a bottle and take some home.